From Arcadia to Messinia in 3 days

How much of the beauty of two wonderful Peloponnesian prefectures can you fit in three days?

Enough to get a first taste of their magic, to locate their best places to be and to return soon for more.

Our three-day trip starts from Megalopolis and crosses 209 kilometers in total to end up at Polumnio’s waterfalls by making a stop at frozen in time little villages, unknown ancient cities and crystal clear rivers that shape dreamy waterfalls. Shall we?

19 kilometers south of Megalopolis, where the summits of Mt. Lykaion meet Mt. Taygetos, there is a tiny village.

It is Arcadia’s Chrani village with its red tiled houses adding red touches to the green landscape, and their century old plane trees standing as guards beside small churches, like the ones of Agia Theodora and Agios Nikolaos with their running waters. 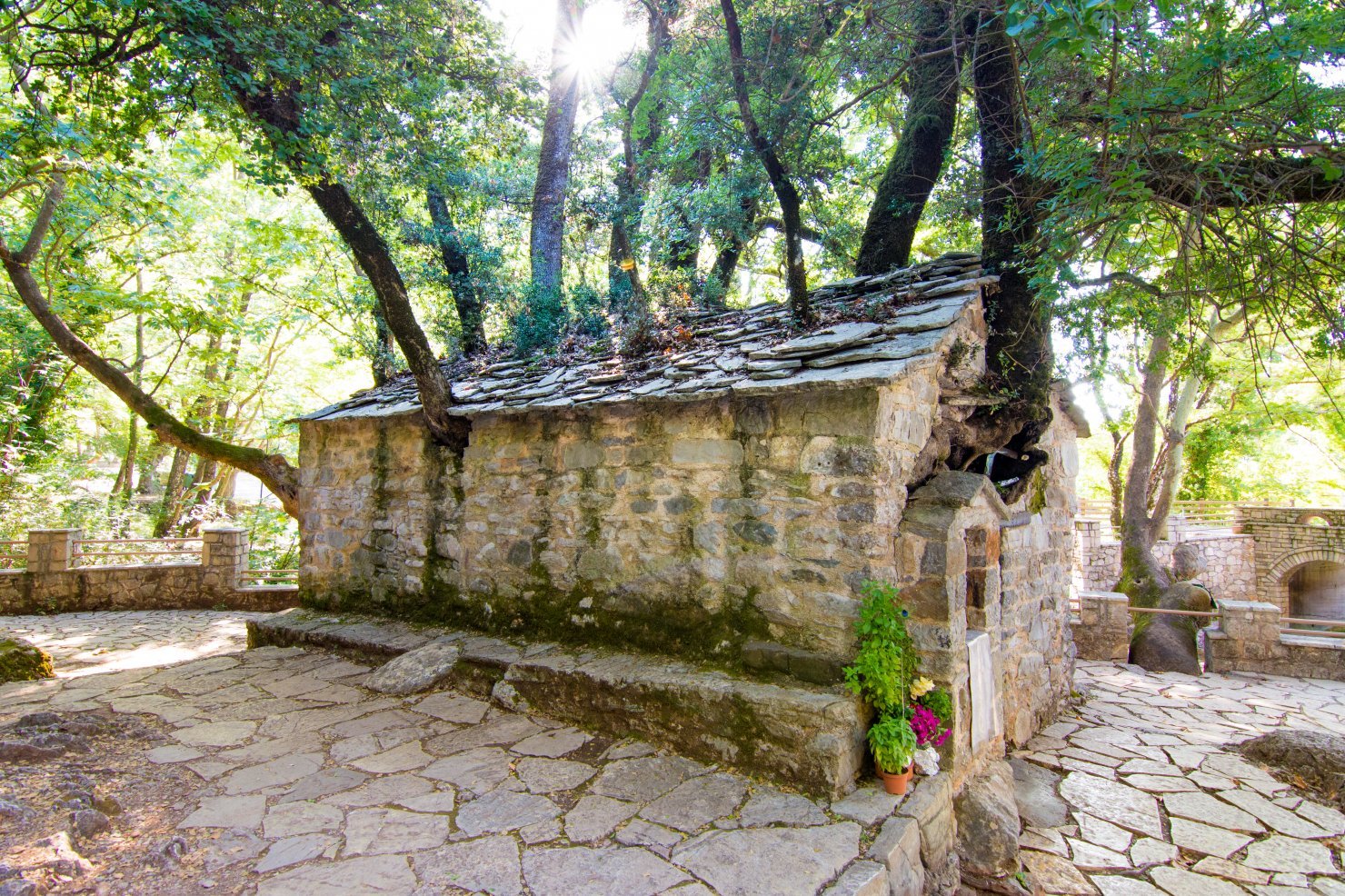 Amphitheatrically built on the east side of Agios Elias (Saint Elijah) hill, Isaris village overlooks the Messinian plain and the valley of Megalopolis, nestled among oak and chestnut trees.

In the sights are included the impressive stone building of the elementary school that was built in 1930, two museums, an ecclesiastical and a folklore one, the old train station on a picturesque scenery, and Agios Nikolaos, the central church of the village with its impressive golden icon screen.

A quarter of an hour from Isaris (7.5 kilometers to be more precise) there is a small Arcadian miracle: The stone church of Agia Theodora that dates back in the 11th century and on its roof grow (no one knows how) 17 trees.

A small river right beside it is offered for walks under the shade of the plane trees.

Lykaion was the sacred mountain of the Arcadians in antiquity.

On its side, Lykosoura, as Pausanias says, is the oldest city of the world. At its atmospheric ground there are saved some parts of the citadel’s wall that was here in the 5th century B.C., and the Sanctuary of Despoina, which as Pausanias writes the Arcadians honor her more than any other god.

And if this name doesn’t ring a bell, it is because, as our explorer friend explains, Despoina was the nickname that her followers used to call her, who didn’t let him write her real name to the uninitiated. So we are still wondering.

In Messinia we are welcomed by one of its most beautiful mountainous villages.

It is climbed at an altitude of 850 meters with a beautiful, century old chestnut forest on its “feet”, perfect for hiking and cycling at its dirt road, next to running waters.

At the central square of the village there is the preserved Trani fountain, and the stone school building that operates as a guest house.

The sufficient options for food and accommodation make Ampeliona ideal for our first overnight stay of our three-day trip.

(Or about three hours of hiking)

If you prefer driving, 17 minutes from Ampeliona there is the amazing temple of Epicurius Apollo, the first Greek monument that UNESCO included in the list of Intangible Cultural Heritage.

At an altitude of 1.131 meters, on a rocky region called Bassae, which translates as little plains, the plateaus that are formed among rocks, Epicurius Apollo was built in 420 B.C.

It is one of most impressive and most special ancient temples in Greece, considering the fact that it combines all three architectural styles (Ionic, Doric and Corinthian) in its columns.

More about the temple of Apollo Epicurius here  Andritsaina. 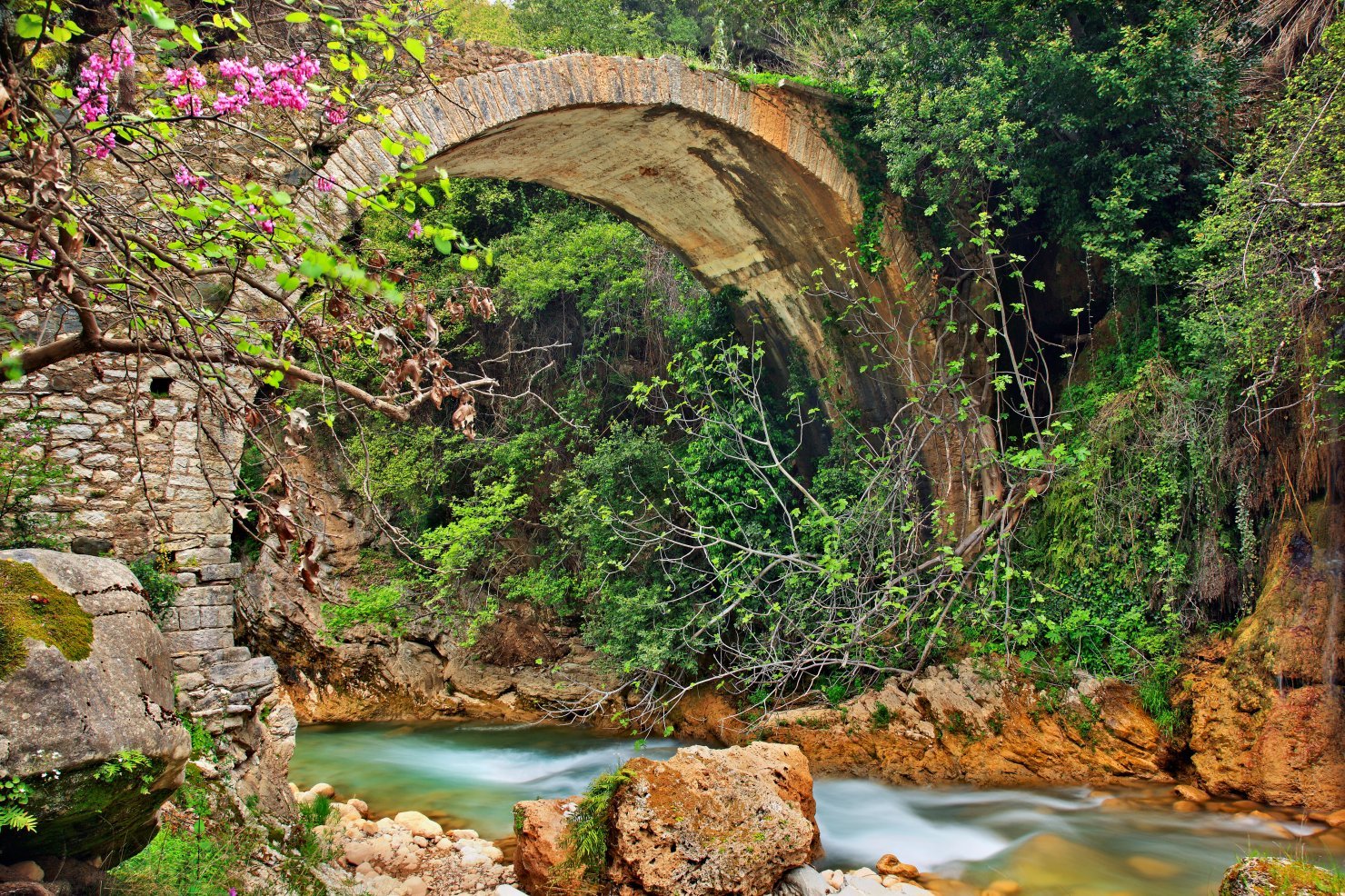 From the wonders of ancient architecture… we move on to the wonders of nature with a first stop on our route to explore the remnants of Ancient Figalia, the residents of which worshiped Apollo Epicurius.

Here we follow the downhill road to the Platania village and then we follow the signs that write “Nedas Waterfalls” until we reach the end of the dirt road and continue our route on foot at the green path that will bring us, after 10 minutes of walking, to the first waterfall of Neda.

Keep walking for ten more minutes  and you will find yourself at the second waterfall, the big lake of which is offered for (very) refreshing dips in its blue green waters during the summer, and for pic nic under the shade of plane trees at its banks during spring and autumn. 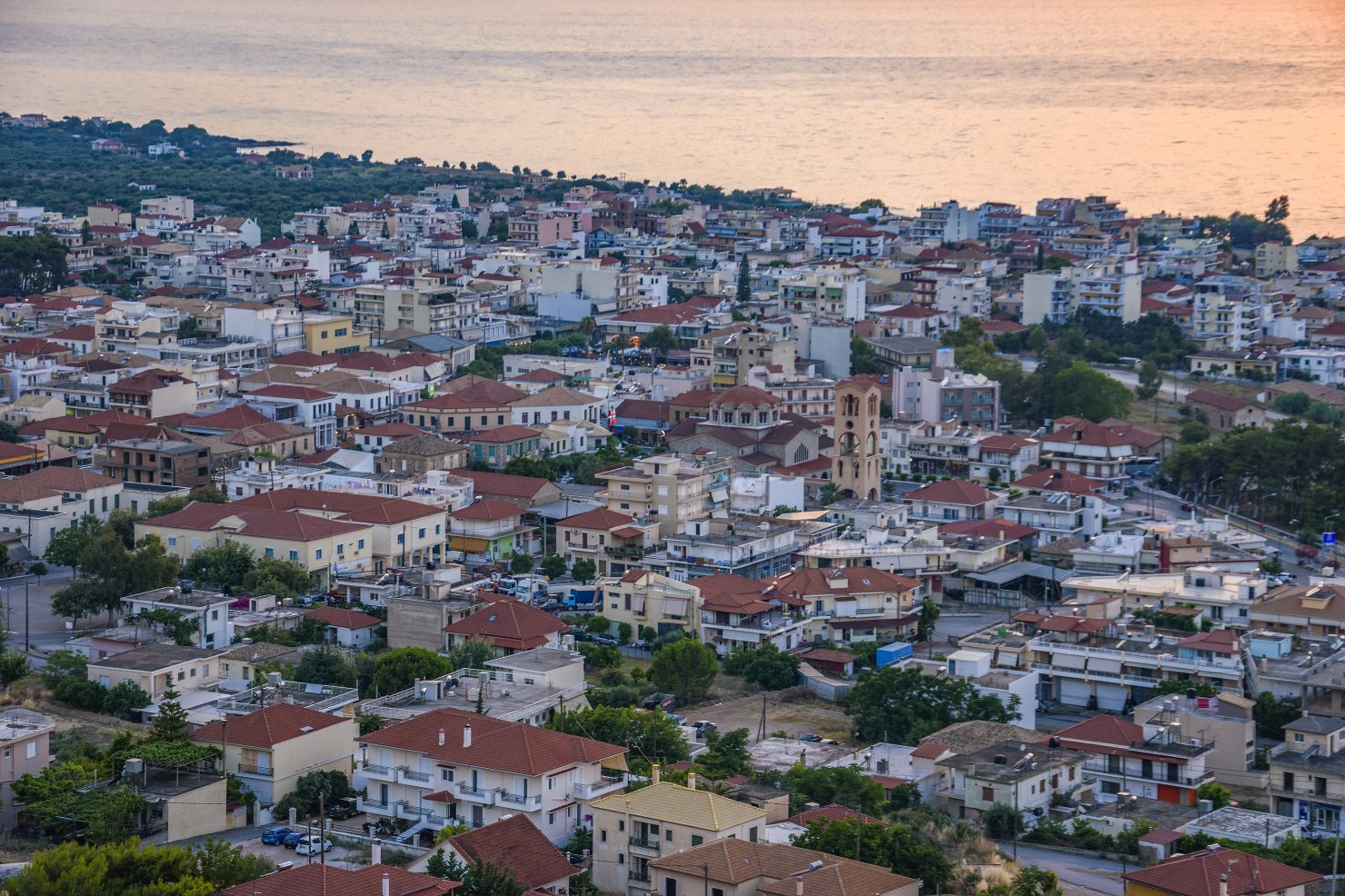 One of the most beautiful cities of Peloponnese, the little but quite vibrant Kyparissia touches on the one side the infinite turquoise of the Ionian Sea and on the other side the slopes of Mt.

Aigaleo, and it has… as a crown a fairytale-like Frankish Castle that overlooks a fantastic sunset.

Around the castle, the Upper Town (Ano Poli in Greek) is the perfect place for evening strolls among flowery yards and colorful old mansions.

An abundance of guest houses and exceptional choices in food make Kyparissia an ideal stop for the second overnight stay of our trip.

The villages of Trifillia are included in the most beautiful and less explored villages of the prefecture of Messinia- since they are mountainous and Messinia is mostly famous for its beaches.

The route from Kyparissia passes by the villages of Blemiani, Vrises, Karvouni and Mouriatida before it ends up at the gorgeous Sellas village, with its tiled houses, the picturesque square with the traditional cafeteria and the interesting Folklore Museum.

A visit here worths the Tripylos Park, right outside the village, the paths of which are perfect for wanderings at the banks of the Arcadian river that crosses it. 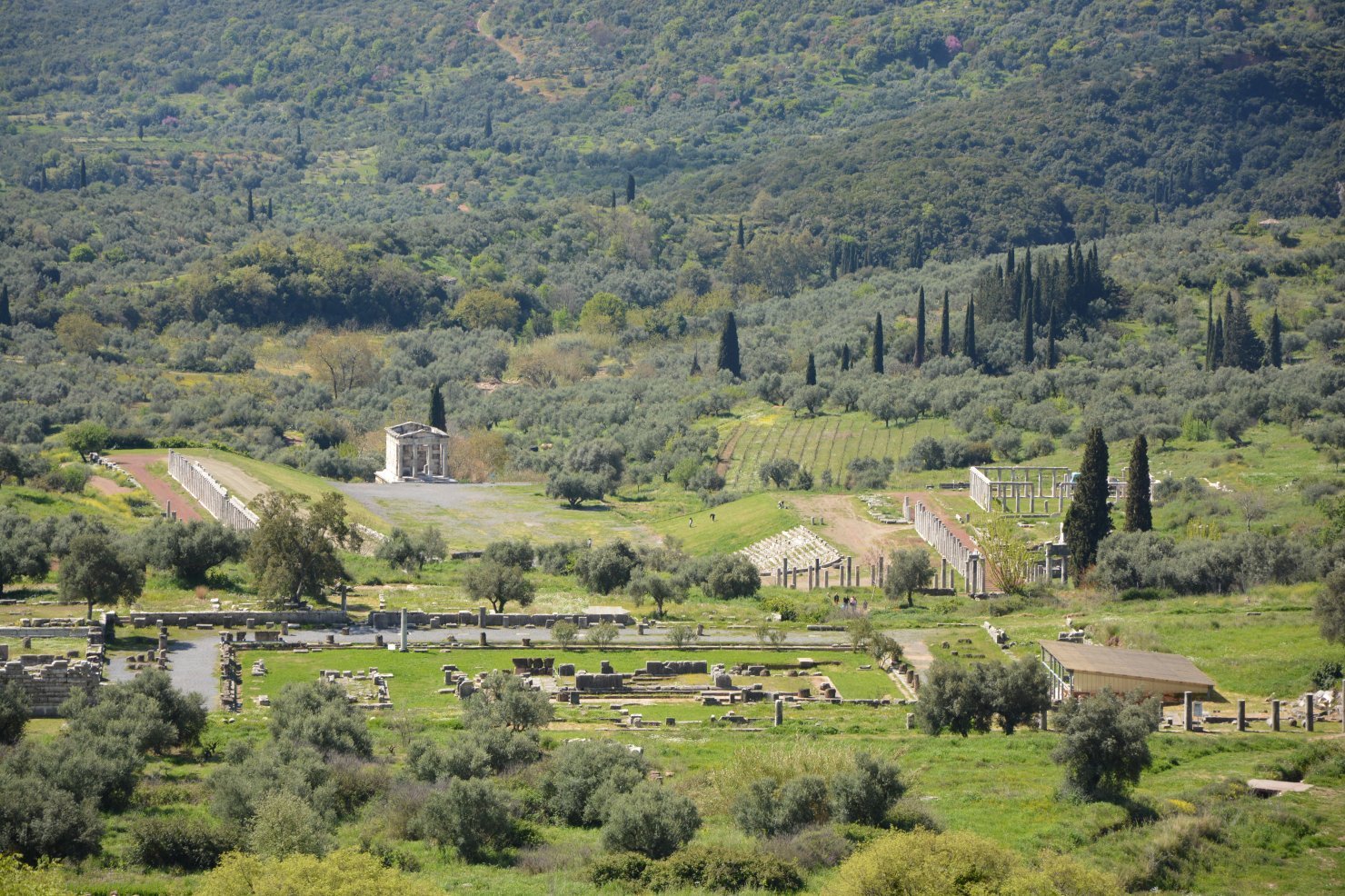 When the Theban general Epaminondas released Messinia from the Spartans, in 370 B.C., he built a city to symbolize freedom for ever.

Today, this city is one of the biggest and most impressive archaeological sites in the country.

On its green fields, which especially in spring are marvelous, are saved in great condition  the stadium and the gymnasium, the ancient theatre, the Ekklesiasterion with its colorful mosaics, the Asklepieion and the Arsinois fountain that once provided water for the entire city.

A heaven on earth is hidden almost next to the Messinian village called Kazarma:

It is the until recently secret Polymnio, the pictures of which star every summer on the social media, since that much beauty can’t stay a secret for long.

Fifteen consecutive lakes, looking like they came out of a fairytale, named with strange names (Kadi, Kadoula, Mavrolimna, Tou Tycherou, Tou Italou, Tou Panagou, Tis Stathoulas…) and framed either by big waterfalls, or by the river waters that follow the dirt path to end up in small pools, perfect for cool dips that will refresh you from the summer heat. 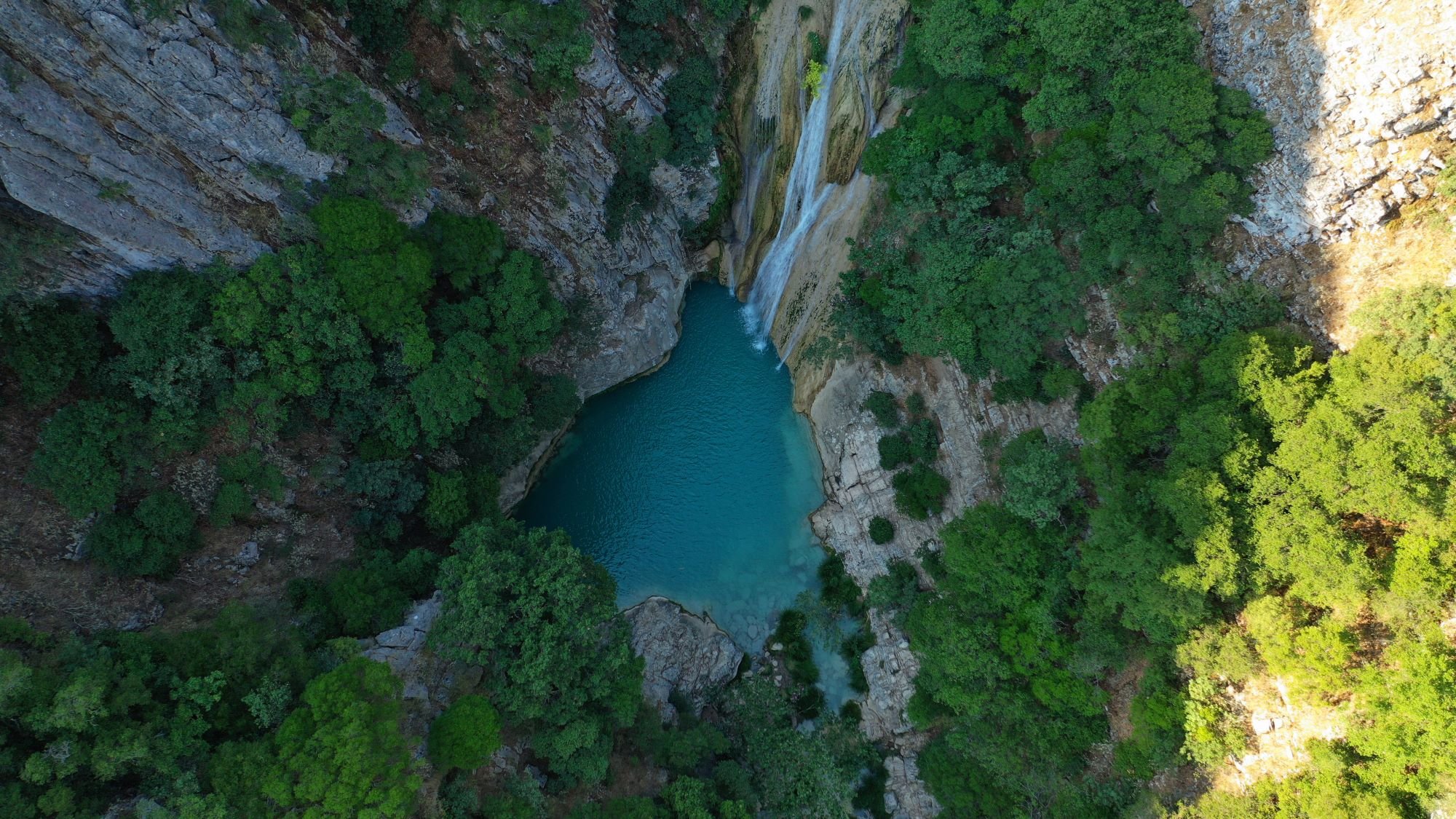 The total route from lake to lake has a three kilometers length, with some parts needing more attention at climbing.

Easy access from the path (without climbing and doing other extreme sports) have the Kadi Lake with its 25 meters waterfall, Kadoula and Tou Italou Lake.

All the route along with the stops on the map here  https://tinyurl.com/y3ebzowb